Media coverage and public awareness of alleged police brutality has drastically changed in the era of YouTube and Twitter. During the Civil Rights Movement, only journalists sent by publications to cover racial unrest could widely disseminate images from demonstrations like the Selma to Montgomery March. Alabama native Spider Martin was one of those journalists. The Briscoe Center for American History at the University of Texas in Austin acquired Mr. Martin’s archive, including more than 1,000 images shot in and around Selma, which lead to our collaborative publication, Selma 1965: The Photographs of Spider Martin. We asked Ahmad Ty-ke Ward, the Head of Education at the Birmingham Civil Rights Institute, to comment on Spider Martin's significance and how the power to engage in this kind of activism is now in the public's hands.

The Selma to Montgomery March was a landmark event in American history which ultimately led to the passage of the 1965 Voting Rights Act. In February of 1965, twenty-seven-year-old Jimmy Lee Jackson, demonstrating with his family for the right to vote, was fatally injured in Marion (Perry County), Alabama. Jackson had placed his body between his mother and a state trooper’s club and was shot in his abdomen. His death galvanized groups like the Southern Christian Leadership Conference (SCLC) and Student Non-Violent Coordinating Committee (SNCC). Active in voter registration efforts in the Black Belt, these groups decided to stage the largest demonstration on behalf of equal voting rights for African Americans in history—a march from the Dallas County seat, Selma, to the Alabama State Capitol in Montgomery, a distance of fifty-four miles. 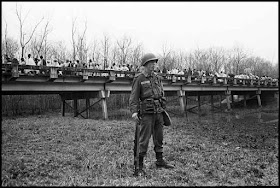 James “Spider” Martin, a native of Wylam, Alabama, and an up-and-coming photographer with the Birmingham News, was sent down to Selma to cover Jackson’s death. Martin had cut his teeth on civil rights coverage during the events that happened in Birmingham in 1963. Even with that background, he could have no idea how instrumental his work would be to the Selma movement. With his camera, Spider Martin would serve as recorder, witness and moral compass for the rest of the country trying to make sense of the situation unfolding in Alabama.


“Dr. King told me the reason they were marching and protesting in Alabama was because of George Wallace, Bull Connor, Sheriff Jim Clark and Al Lingo. They all fell into the plan. Dr. King said we could march and protest in Chicago and nobody would care. But in Alabama . . .”

One of the most powerful images shared in the Selma 1965 volume depicts long-time Selma activist Amelia Boynton Robinson lying in the median near the Edmund Pettus Bridge after being attacked by a state trooper. Images of the trooper standing over Mrs. Robinson’s unconscious body and other marchers trying to assist her spread across this nation and the world.


“After beating the marchers, the Alabama State Troopers and the Dallas County Posse chased the marchers over the bridge back to the church. One of the troopers I had become friends with had warned me that Gov. Wallace told some of the trooper to ‘Git Spider Martin. He has been having too many pictures in the Yankee Press.’ I wasn’t afraid of anything. When I got to the church I was standing near the project apartments. For all I knew I was about to be shot. All of a sudden a big black woman reached out and drug me into her apartment. She said 'git in here before they kill you.' I smelled turnip greens and corn bread. I sat down and ate my favorite food. Ten minutes later I was back outside, still alive and energized.” 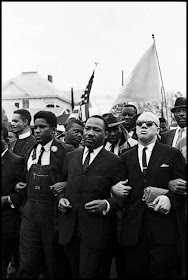 Martin would chronicle the events of March 1965 from Bloody Sunday to Dr. King’s triumphant speech near the Capitol steps in Montgomery after the fifty-four-mile trek had been completed. King himself credited Martin with bringing the attention of the world to Selma through his photos. What Martin accomplished, whether he realized it or not at the time, was true activism. He exposed police brutality and state-sanctioned oppression to segments of the public who were unable (or unwilling) to acknowledge their presence in our country.

The spectre of police brutality still hovers over our land and events of the last few years have placed it firmly in the forefront of the American conscience. However, the tool of activism has changed from a 35mm camera into a cell phone. How would the stories of Eric Garner in New York, Walter Scott in South Carolina, and Freddie Gray in Baltimore have differed if there had not been digital evidence of the events? Since the show of force in the streets of Ferguson, Missouri, the smartphone has been the great equalizer for citizens calling for fair policing and safety during encounters with law enforcement. During his time covering the civil rights movement in Alabama, Spider Martin was called a “race traitor,” a “white nigger,” and had his well being threatened just for recording the events taking place in front of his eyes. There are current instances of citizens being threatened with arrest for recording police encounters, being told that recording is against the law, and having their recording devices confiscated by officers. In the case of the individuals that recorded the Garner and Gray incidents, both men were subject to harassment from law enforcement after the videos became public. Kevin Moore was arrested at gunpoint during a traffic stop in Baltimore days after complaining of police “harassment and intimidation.” Ramsey Orta was arrested in New York on a weapons charge and while in jail went on a hunger strike after he had reason to believe correctional officers at Rikers may poison his food. Even with these occurrences, there has been no shortage of “social media activists” taking a stand with their phones. It is quite possible that in the next fifty years, we may be discussing someone’s cellphone video or pictures with the same gravitas that we use with Spider’s work.


“At last all Americans can vote. I was standing on stage wrapped in the curtain folds. B’ham was my home town. As Dr. King walked off stage he saw me there. He shook my hand and said, ‘Spider, if it weren’t for guys like you shooting those pictures we could have marched and protested forever and nothing would have happened. The world saw your pictures. Thank you.’”

that the Voting Rights Act of 1965 had passed


The Birmingham Civil Rights Institute is privileged to own forty-eight prints from Spider Martin’s work in Selma. In 2006, Margaret Jemison made a gift of the prints to the Institute in memory of her mother, Marie Stokes Jemison, a Birmingham activist whose friendship with Spider Martin enriched her life and that of her family. Over the years, I’ve had the distinct pleasure of displaying these images in our gallery as well as sending the collection to various museums around the country. Selma 1965 is an incredible opportunity for the world to be exposed to the masterwork of an artist-turned-activist. At a time when the right to vote is once again questioned for segments of our population, perhaps we could use a reminder of what it took to get full representation for all Americans.


* All quotes attributed to Spider Martin are from the personal notes found on the backs of the photographs in the Birmingham Civil Rights Institute collection. 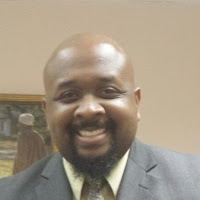 Ahmad Ward is a native of Elizabeth City, North Carolina. He received a BA in Art from Elizabeth City State University in 1997 and a MA in Museum Studies from Hampton University in 1999. He began his tenure with the Birmingham Civil Rights Institute (BCRI) in June of 1999 as Education Assistant. He now serves as the Head of Education where his responsibilities include public programming, teacher workshops and training sessions, and the general workings of the Department. Ward is a member of the Smithsonian Affiliates Advisory Board and the Jekyll Island Management Institute Selection Board Committee. He is also active at Metropolitan A.M.E .Zion church in the children’s education department, male chorus and Sons of Varick. His hobbies include drawing, watching sports, cooking, sleep (when possible) and fantasy football. He is married to Dafina (Cooper) Ward and they have two daughters, Masani Ashiya and Aminah Elon.