Here in Austin, we’re fortunate enough to enjoy “grill out” weather from Easter through Thanksgiving, but this weekend is special. It's Memorial Day and we want you to step up your cookout game with some tried-and-true recipes from some of the biggest barbecue players in Central Texas: Scott Roberts of the Salt Lick, Vencil Mares of the Taylor Café, and from the notebooks of Robb Walsh (we posted Robb's recipe for barbecued hog forequarter with East Carolina barbecue sauce and a Tennessee Hog Rub here).

So as you prepare to honor the men and women in the armed forces,
take this opportunity to preserve and enjoy diverse American foodways and share them with your friends and family. For more recipes, check out Barbecue Crossroads: Notes and Recipes from a Southern Odyssey and The Salt Lick Cookbook: A Story of Land, Family, and Love. Happy Memorial Day!

Vencil Mares of the Taylor Café learned how to make sausage at Southside Market in Elgin. This is a Bohemian Czech sausage recipe from Central Texas.

If you cook sausage too quickly, you render the fat out of the “batter” of meat and fat inside the casing. This causes the sausage to squirt out all its fat. For best results, set the batter by cooking the sausage very slowly at first. Once the batter is set, you can cook the sausage over high heat.
Coarsely grind the beef rump and pork butt together through the ¼-inch plate of a meat grinder. In a large bowl, mix the ground meat with the salt, garlic, pepper, and cayenne. Knead the mixture with your hands until everything is well blended. Don’t rush the mixing—it takes a long time.

In a small skillet, heat a little oil. Form a meatball-size piece of the mixture into a small patty and fry it. Taste for seasonings, and adjust to your taste.

Soak the hog casings in lukewarm water. Stuff the meat mixture into the hog casings with a sausage stuffer or a pastry bag, and tie into 4- to 6-inch links. The sausage will keep for 3–4 days refrigerated, and up to 2 months frozen.

When you’re ready to cook the sausages, place them in a pan of warm water on the stove and slowly bring the heat up to 140°F to set the “batter.” Set up your smoker for indirect heat with a water pan. Sear the links over hot coals for 3 minutes on each side, or until nicely brown. Move them to indirect heat over a drip pan and smoke for 30 minutes, or until cooked through. Makes 10 pounds.

Grind 8 pounds of boneless turkey and 2 pounds of fatty pork, and proceed with the recipe for Beer Joint Sausage.

Mix the dry ingredients in a bowl. Beat the milk and egg together and combine with the dry ingredients. Add the chopped onion. The batter should be stiff enough to hold its shape. If the batter is too soft, add more cornmeal until it is firm.
Gather a heaping tablespoon of batter and roll into a ball or a finger shape as desired and drop into 350°F oil and fry 3–4 minutes or until golden brown. Maintain the temperature and fry in batches of 4 or 5. Makes about 20 hush puppies.

Salt Lick Coleslaw
The Salt Lick coleslaw is a shredded cabbage salad mixed with vinegar and oil dressing. Dousing the cabbage with mayonnaise wasn’t an option for settlers when they were traveling west in wagon trains. They had to use ingredients that wouldn’t spoil. We wanted to stay as true as possible to how my family originally made coleslaw.

The key to this coleslaw is to mix and serve it fresh. Over time, the vinegar pulls juices from the cabbage, changing the texture, taste, and bite. At the restaurant, we don’t make a batch of coleslaw until the first customer of the day has walked in the door. And we don’t make another batch until the first tray is more than one quarter empty. That way we’re constantly serving this classic salad at its absolute best.

For the coleslaw: Place cabbage in large mixing bowl. Sprinkle oil over top and mix thoroughly. Sprinkle celery seed and sesame seeds over top of cabbage, and mix thoroughly. Add Salt Lick vinegar mix, and combine well. Place in serving bowl, scrape all remaining seeds and dressing from mixing bowl, and add to serving bowl. Serve immediately because coleslaw is best served while cabbage is crisp and crunchy.

Note: This mixture can be refrigerated for up to 24 hours prior to making coleslaw. Be sure to mix well and have pepper in suspension prior to using in coleslaw dish. 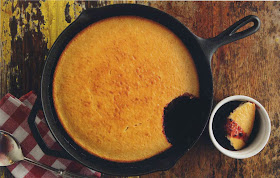 After I took over the restaurant operations, I wanted to bring back a dewberry cobbler that my grandmother, Roxie, used to make. Dewberries would come into season once a year; and she’d make the best cobbler I’ve ever had using those berries. I thought it would be great to use a berry that grew naturally in this areas for one of our desserts.

I called the Texas A&M extension agency to find out exactly what type of berries they were and whether I could grow them on our property. After a bit of digging, I found that what I thought were dewberries were actually western trailing blackberries. And though they do grow well here, they are spotty in production and not reliable for commercial farming. I wasn’t convinced. The extension agent finally gave me the name of a nursery that sold the western trailing blackberry, but the nursery told me the same thing: The berries just wouldn’t do well in large production, and for that reason, they refused to sell them to me.

Despite my efforts to use a local berry, we had to settle for frozen blackberries. The cobbler is just as good but without that farm-to-table charm I was hoping to offer.
In making a blackberry cobbler, sometimes the cooking process will cause the berries to disintegrate. When that happens, the end result is blackberry liquid with a cake topping. In order for that not to happen, the berries must remain frozen up until the moment the cobbler is placed into the oven for baking.

For the batter:
Preheat oven to 375 degrees. In mixing bowl, mix first 3 ingredients. In separate bowl, whisk together egg, evaporated milk, and water. Add wet ingredients to dry, mix to form a batter, and then whisk in melted butter. Remove blackberry mixtures from freezer and ladle batter on top. Bake for 15 minutes. Reduce heat to 350 degrees, and bake 55 to 60 minutes more, until done.